If you are on Windows 10 Insider build 14332, you can head over to Windows Store and download your favorite ad blocker for Egde. Like on Chrome and Firefox, both AdBlock and AdBlock Plus are free to use. After installing, you might want to check if these ad blockers work properly. Users are complaining about slowed down performance and inability to install. 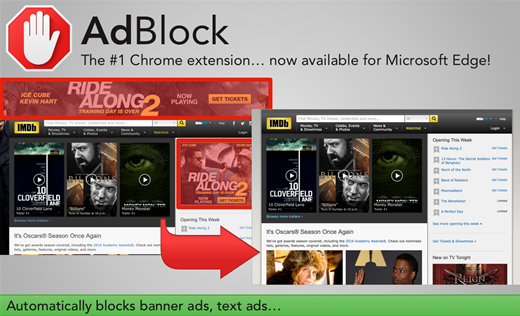 Ad blockers are among the most downloaded extensions on Google Chrome and Mozilla Firefox. Now that these ad blockers are available for Microsoft Edge, users will be able to enjoy ad-free browsing. One thing to note here is that ad blockers for Microsoft Edge browser are only available on Windows 10 Insider builds. Extensions will eventually make their way to non-insider builds of Windows 10 in future updates.

With new extensions, Edge is slowly becoming a better browser. A faster pace of updates and new extensions can help Microsoft Edge’s growth.

What do you think about Microsoft Edge, advertisements and ad blockers? Feel free to add your comments.

You can download ad blockers for Microsoft Edge from the following links.