How to Avoid iOS 9 Update Errors

Apple has made iOS 9 live. Apple has put less importance on introducing new features in iOS 9. Instead, Apple has made sure the latest iOS build is stable and bug-free. Users across the globe are busy upgrading their Apple devices to iOS 9. While iOS 9 is being praised all over for its stability, Apple’s servers seems to be struggling to keep up with the huge numbers of iOS upgrades. There are many users reporting failed attempts of iOS 9 update. Over the air upgrade size of iOS 9 is about 1 GB and users are complaining that they are receiving Update Failed error during the update process. 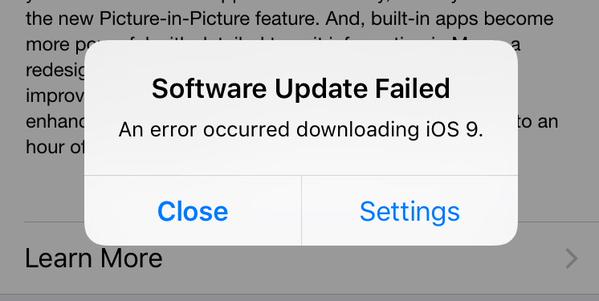 #iOS9 not downloading for most people. We keep getting “software error” message.

And after 4 hours of downloading #iOS9 and after “16 minutes remaining” i get an error message that it failed!!!

Anyone else try and download new #iOS9 but got an error message?? #appleproblems

#iOS9 is not working for me ? It keeps saying there’s an error. Someone help pls!!!

With large number of users trying to get their hand on iOS 9, failed software update errors are becoming common. Avoiding this error is simple enough though. Instead of updating your device over the air, connect your device to iTunes and update it via iTunes. This method is working for users as they are confirming the same. Make sure your iTunes is updated to latest version before proceeding.

You can also download iOS 9 IPSW and update your device via iTunes’ Restore button. You can read more about upgrading to iOS 9 using IPSW.

Note for jailbreakers: If you have jailbreak your device on any iOS version, do not attempt to upgrade to iOS 9. Upgrading to iOS 9 will make you lose your jailbreak and there is no way you can get back to previous iOS version. Wait till legitimate updates of iOS 9 release.

You can follow me on Twitter and join Tech Stuffer on Google+ for more updates on iOS 9.