As we mentioned previously on Tech Stuffer, if you earned your MCSA Windows 8.1 certification by passing Exams 70-687 and 70-688 before 31st May 2015, you are eligible for free upgrade to Windows 10 certification. You will or might already have received an email from Microsoft which contains a voucher. Use this voucher code while registering for exam 70-697 and it will be free for you. This doesn’t end here! You will also receive a second shot. Which means if you failed your Windows 10 exam in the first appearance, you can appear for exam 70-697 again, for free. Take a note that second shot is not available with beta exams. 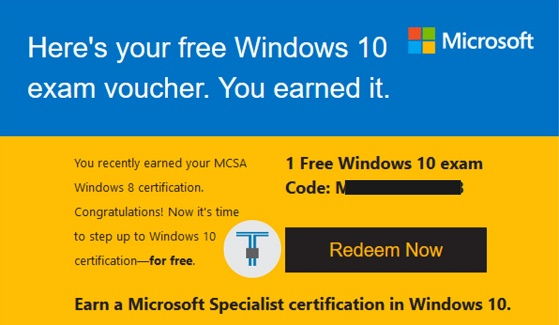 Microsoft is also bidding farewell to Windows 8.1 certifications. To keep up with latest technology, Windows 8.1 exams will not be available after 30th November 2015.