The news started rolling on the Internet when a user asked about the availability of Cortana in India on Microsoft community page. Microsoft’s intelligent personal assistant system Cortana is currently supported in China, France, Germany, Italy, Spain, United Kingdom, and United States only. In India though, Cortana is available under Windows Insider program. Answering to the Cortana’s general availability in India question, a Microsoft support engineering suggested that the Cortana support will be available with the November update releasing on November 10. This makes it pretty clear that Microsoft is preparing to release the Windows 10 Fall Update on 10th November which is just a few days away. 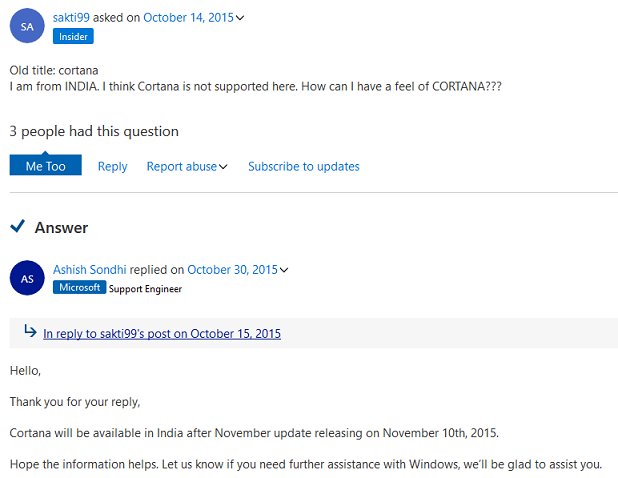 The upgrade and activation process was messy in initial Windows 10 release. There was no clear explanation on how to upgrade to Windows 10 from previous Windows versions. Microsoft later made a documentation available on their website to make things clear.

The Fall Update also makes Windows 10 activation process easy. A Windows 7, 8 or 8.1 product key can be entered during installation of Windows 10 and it will activate properly assuming the key entered is eligible for upgrade.

One more ‘feature’ Microsoft has added in Fall Update is advertisement in Start Menu. The Start Menu will now show ‘occasional suggestions’ to users. These ‘suggestions’ can include ‘recommended apps’ to install. These occasional suggestions can be turned off with a single click by going to Settings though. I’m not sure how much space Microsoft is going to give to monetisation, but I and most of other users who care for their privacy won’t be okay with seeing advertisements on their screen.

The upcoming Windows 10 fall update is also adding some other features including Skype integration, colored title bars, ability to track your device in case of being stolen or misplaced, tab previews in Edge browser, Cortana improvements and ability to install apps somewhere else on your drive than ‘forced’ C: drive.

If you found this article useful, please share it with others.

That’s it for now. Until we meet next.