Facebook’s Only Anonymous App Rooms Is Shutting Down Tomorrow

[mks_dropcap style=”square” size=”52″ bg_color=”#ff3b3e” txt_color=”#ffffff”]R[/mks_dropcap]emember Rooms? No I’m not talking about your bedroom or something, I’m talking about Facebook’s first anonymous app – Rooms. Rooms, a project by Facebook Creative Labs, allowed users to interact without giving away their real name (or any other personal information like a phone number). Rooms was advertised as ‘bringing old school chat room fun’.

I know it’s hard to digest Facebook launching an app requiring nothing except a confirmed e-mail address. But that did happen and is already dying tomorrow.

Facebook decided to shut down Creative Labs and some of its apps a few weeks ago. Rooms is one of these app along photo-sharing app Slingshot and video app Riff. Creative Labs was launched nearly two years ago to focus on experimenting and developing apps besides Facebook’s mainstream umbrella.

Among a few other users, I was a non-frequent user of Rooms. I even created a Room for Tech Stuffer which no one ever joined (no publicity). I even wrote a tutorial on how to create and join rooms.

Just after two days of its launch, Rooms ran into problems when creators of an app of similar name Room (by Room Inc.) claimed Facebooks copied their app. Room by Room Inc. did not see any development after December 2014 though.

For some unknown reasons, Room was never developed for Android (or other operating systems for that matter). Only iOS version was released. It never made it to mainstream social networking either.

A message was recently pinned to every ‘room’ that Rooms is closing down on 23rd December.

Rooms will be closing their doors on December 23,2015. After then you’ll no longer be able to post, so please reach out to fellow Roomies if you want to stay in touch. 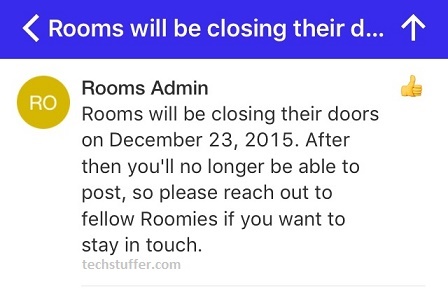 Launched on 23rd October, 2014, Rooms will shut down exactly after fourteen months on 23rd December.

I have never used Riff and Slingshot but I liked the idea behind Rooms. A user could join by providing an email ID and create or join ‘rooms’ of different topics. There was no way to search for topics and rather a user had to have a QR code invitation of that a room. Users who created and joined room could share the QR code anywhere and to join a room, the QR had to be scanned.

Rooms could also search camera roll for QR code invitations and those rooms used to be automatically joined.

Rooms never saw its mainstream success due to no publicity. Most of the ‘rooms’ sounded ghostly and abandoned. But there were many rooms which saw regular activities. There were rooms related to many different topics including Drones, VSCO, Nail Art, Latte Art, Noms from Above, Instarooms, Depression and Anxiety Support (most supportive room), Women in Tech to name a few. Just like any other social platform, Rooms also soon started having spam and adult content all over the place. 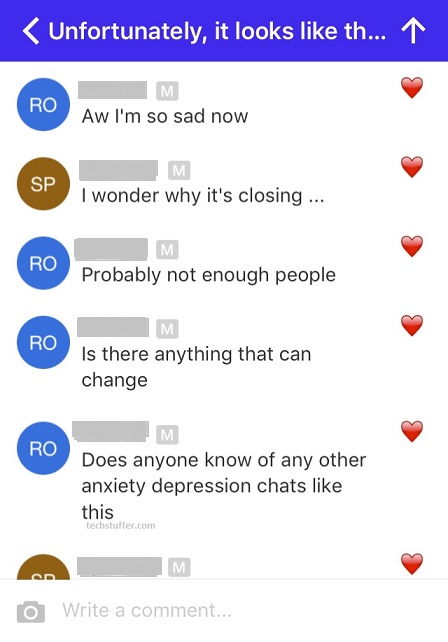 Facebook has not declared any reason for closing down Rooms. But it is understandable that a free app which hardly anyone use can not be carried forward for much longer. Riff and Slingshot have already seen their demise. After 23rd December (tomorrow), users will not be able to post new messages but they can delete content posted by them.

I’m not very sad to see Rooms go but if done properly, Rooms could prove to be a cool place, away from the noise of mainstream platforms like Facebook. I wish Rooms could continue but it will not.

Let me close that door of my ‘room’. It’s chilling out there.