[mks_dropcap style=”square” size=”52″ bg_color=”#ff3b3e” txt_color=”#ffffff”]M[/mks_dropcap]icrosoft has released another cumulative update KB3116908 for Windows 10 update 10511, also known as Windows 10 November Update, Fall Update or Threshold 2 release. The latest update for Windows 10, KB3116908 includes improvements to enhance the functionality of Windows 10 Version 1511 as per the description given by Microsoft.

November Update is the first major update since the launch of Windows 10 and brings new features while fixing bugs and improving stability. The update was highly awaited by users since its announcement. After much speculations about its release, Microsoft finally released it on November 12.

The unexpected removal of November Update left users thinking. A few days later, Microsoft released cumulative update KB3120677 to fix issues with user preference in November Update. With this update, the November Update returned to both MCT and Windows Update.

The most recent update which was released yesterday, does not bring new features to Windows 10. It rather focuses on enhancing the functionality of update 10511. After the cumulative update KB3116908 is applied, the Windows 10 build changes to Windows 10 version 1511 build 10586.17. 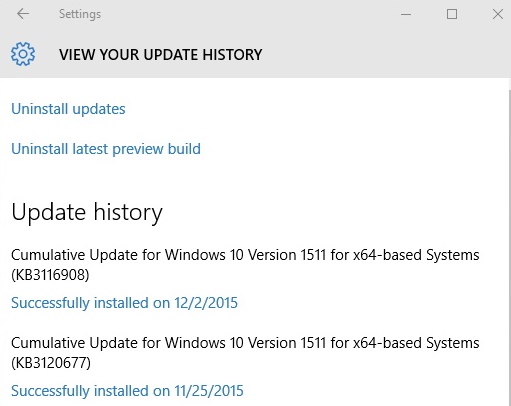 KB3116908 is a cumulative update, meaning it contains all fixes previously released. If your device contains previous updated, only new fixes contained in this package will be downloaded and installed.

Update KB3116908 will be downloaded and installed to all Windows 10 devices automatically. It replaces the cumulative update for Windows 10 version 1511 (KB3120677) released on November 24.