Announcing the latest Redstone build to Insiders, Gabe Aul, Corporate Vice President, Engineering Systems Team, Microsoft has stated that there are issues with the current build that will impact PC gaming experience.

“Hi everyone, Today we are releasing Build 11102 to Windows Insiders in the Fast ring. If you’re a PC gamer or use accessibility software, I highly recommend taking note of the known issues for this build (below) as there are issues that will impact your PC gaming experience,” said Aul in a blog entry.

The latest preview build of Windows 10 Redstone brings a new history menu in Microsoft Edge. History menu was a ‘highly requested feature’ by Insiders, according to the announcement.

The history menu allows users to right-click on the back and forward buttons in Microsoft Edge to have a quick access to recently visited websites in the current tab. A similar feature exists in Google’s Chrome and Mozilla Firefox browsers. 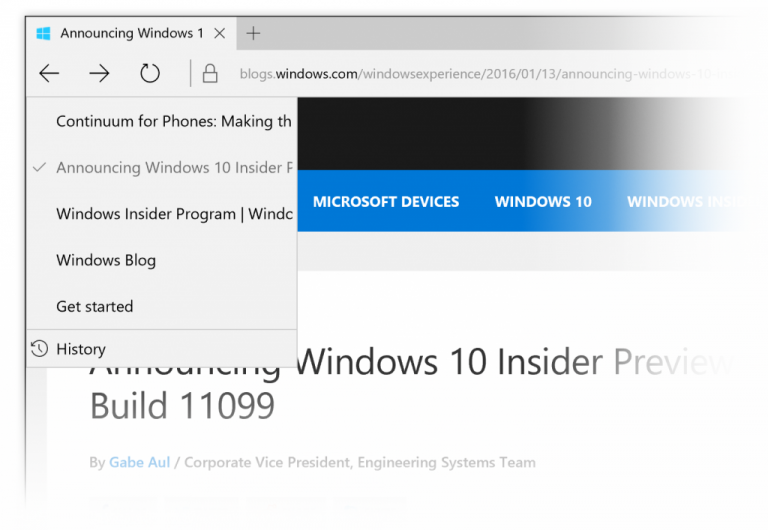 Along with the new feature in Edge, Windows 10 build 11102 has a number of known issues.

When we went live with last week’s PC build, Insiders discovered a bug where the cache for Insider Hub wasn’t properly refreshing – preventing new content from showing up in a timely manner. We’ll include known issues with our blog posts as well as in Insider Hub until the bug is resolved, writes Aul.

As usual, Windows Insiders can get the latest preview build by navigating to Settings > Update & security and clicking Check for updates.

What is Windows 10 Redstone?

Windows 10 Redstone is the code-name of the upcoming major update to Windows 10, which is expected to bring a number of new features and improvements. Current Redstone preview build are more aimed towards ‘structural improvements to OneCore,’ the shared core of Windows across devices.

Feel free to share your experience with Windows 10 Redstone builds.