The New Doom Set to Release on 13th May: Pre-order Now!

All righty crazy fellow Doom lovers! The all-new Doom game is finally arriving and it’s arriving soon. The brand-new Doom will hit Xbox One, PlayStation 4 and PC on 13th May, Friday. The release date was announced by Bethesda and id Software with a fancy, gory, new campaign trailer. As we can imagine (and expect), the Doom trailer is full of shotguns, demons, blood and gore.

The new Doom reboot will include the classic single player campaign mode featuring the marine killing and stopping all those demons trying to take over humans. Along with single player, Doom will also feature old school online multiplayer mode. Sounds all good to me, what about you?

Last year Bethesda, maker of the critically acclaimed Fallout series unveiled DOOM 4 at its E3 conference. Doom 4, now simply called DOOM, is finally seeing a release after going through years of ups and downs during its development. The previous game in Doom series- Doom 3 was launched in 2004, more than a decade ago.

You can pre-order Doom right now. Upon pre-ordering any of the Standard Edition or Collector’s Edition of DOOM, you will receive the exclusive Demon Multiplayer Pack with a bunch of other benefits. Which benefits if you may ask? Then have a look below.

Created in conjunction with Triforce, the DOOM Collector’s Edition includes an exclusive, fully-realized 12” tall collector’s statue of one of DOOM’s most iconic demons: the Revenant. Made of high-quality PVC and modelled from actual in-game 3D files, the Revenant stands on an LED-lit base with internal, slow-spinning turbine from the UAC facility on Mars. The DOOM Collector’s Edition also includes the highly-anticipated game, packaged in an exclusive metal case. 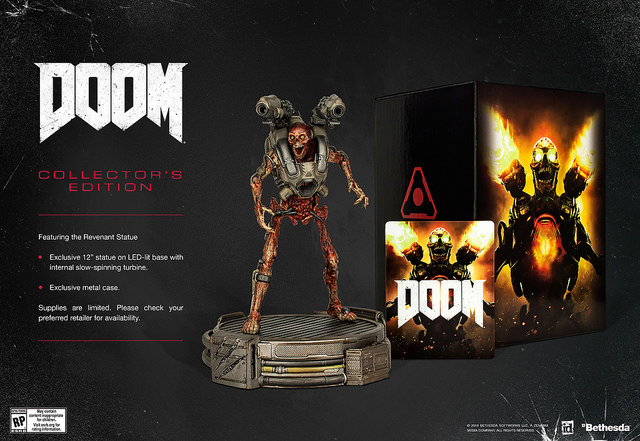 Obviously the Doom supplies are limited. So go ahead and pre-order right now, or lose all these exclusive benefits and wait till 13th March, much like everyone else.