Okay, let me tell you that after Twitter’s newly introduced changes, I was just welcomed by a crazy “Add phone number” pop-up today. Now let me move ahead with Twitter’s new never-planned-next-week timeline changes.

Among many, I assumed his play-of-words as Jack didn’t clearly say they DON’T plan to bring changes at all. Despite Jack saying they didn’t plan the feature to be introduced this week, Twitter has just introduced algorithmic timeline! (I hope Jack is aware of this) Now look Jack, what have we done here.

Twitter don’t want its users to miss important Tweets from people they follow. That’s why, the shiney new, strictly-opt-in timeline change has been introduced. The new timeline feature, once turned on, will show you tweets that are sorted based on relevancy, rather than on time, at the top of your timeline.

Today, we’re excited to share a new timeline feature that helps you catch up on the best Tweets from people you follow.

Bringing a sense of relief, Twitter’s timeline changes are not forced, at least for now. The new feature will be an opt-in, meaning users can turn the setting on if they desire. It is unclear whether Twitter plan to make these changes permanent and forced, but the buzz on the web suggests it will be forced after one point of time. Guess we will have to wait for Jack’s iconic (ironic?) not-planned-next-week flavored tweets.

New Twitter timeline works confusingly simple. After turning on Show me the best Tweets first feature, and being away from Twitter a while, your timeline will display the tweets you’re “most likely to care about” at the top. These “best tweets” are also recent and in reverse chronological order, just like the rest of tweets.

The rest of the Tweets will be displayed right below the “best” tweets and if you please to see the old-school timeline with all new tweets in their current, live order, just pull-to-refresh.

Pretty simple! I told you, didn’t I?

The short answer is, it’s all algorithm based.

The long answer, right from Twitter: Twitter improves timeline by analyzing how millions of people engage with billions of Tweets and use this information to determine the best content to surface. A person’s past Twitter activity helps Twitter to predict which Tweets they might like to see most. Twitter takes a look at accounts users interact with, Tweets they usually engage with, interests, and what’s going on in their network.

See? Twitter’s got it all covered.

We’ve already seen that people who use this new feature tend to Retweet and Tweet more, creating more live commentary and conversations, which is great for everyone.

What happens to promoted tweets and accounts?

Promoted Tweets and Promoted Accounts are not affected by this change. They will continue to work the same way as before. Brands will continue to have access to the same bunch of tools to make sure their ads display to the right people, at just the right moment.

To turn on the new Twitter timeline feature, head over to Settings > Account and look for Timeline under Content section. Turn on the Show me the best Tweets first option and save settings. That’s it. 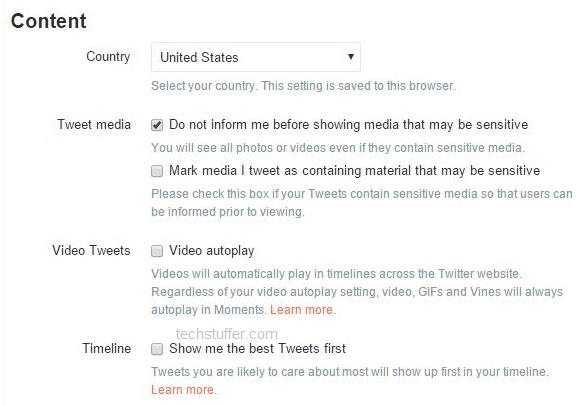 Repeat the same steps if you wish to turn new timeline feature off.

What happens to While you were away feature?

Are you using (going to use) Twitter’s new timeline? What do you think about the new feature and how will it affect users? Feel free to share in comments.