Okay, Let me clear up the heat first. Twitter is NOT dead or something and I don’t want to sound dramatic. But Twitter’s users are thinking otherwise and its plan to bring algorithmic timeline is not quite well received by users. According to reports by BuzzFeed, Twitter is going to introduce “algorithmic timeline” as soon as next week. If turned out to be true, Twitter will be following Facebook, which emphasize “relevance” over “timeliness”.

Twitter has been experimenting the new timeline feature where tweets are sorted by relevance instead of the default, reverse chronological order. I was also one of the victims of Twitter’s “brutal experiment” which messed up my timeline. In December last year, reports started surfacing around the Web suggesting Twitter’s “relevant timeline” experiment.

This time around though, it looks like Twitter is done with experiments and ready to implement the weird, out of order timeline “feature” (a disastrous one, if you ask me). After the report by BuzzFeed started spreading, users are thinking of it as the “death of Twitter. #RIPTwitter has become worldwide treading topic and users are bidding farewell to Twitter already. 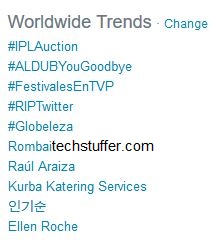 RIP Twitter, indeed. All we wanted was a higher character count and an edit option.

Twitter is yet to confirm or deny these reports and the possibility of introducing “out-of-order” timeline. However, Josh Sternberg of NBC News has tweeted that the algorithmic timeline feature will be “strictly opt-in”, without citing any sources.

Sources at Twitter tell me algorithms are strictly opt in.

What my understanding tells me is that Twitter and Facebook are not alike and Twitter shouldn’t be implementing à la Facebook relevant feed feature. Twitter’s reverse chronological feature makes Twitter what it is. Changing the order will be chaotic experience for users and I’m sure I’m not the only one who thinks so.

Dear @Twitter. You are not Facebook. You are a real time news and communication platform. Emphasis on time. Time is chronological.

You know Twitter’s making a big mistake when “RIP Twitter” is trending.

— Neither a Brood Mare Nor a Prairie Dog (@HalloweenBlogs) February 6, 2016

Twitter recently introduced “While you were away” feature which too, was a disastrous experience for me. What Twitter fails to understand is its users have become used to with the reverse order of Tweets. I don’t think a user looks at time while reading the Tweet assuming the Tweets are in reverse order. Seeing older Tweets popping up out of nowhere in middle of fresh tweets is a painful experience and breaks line of sight. I don’t think we are ready for this feature, are never going to be.

It is worth noting that Facebook recently started surveying users to understand what they prefer to see on top of their News Feed. To understand more about what users prefer to see in their feed when they check Facebook, users are being asked to rate stories based on “how much did you want to see this story in your News Feed?”

It will be interesting to see if Twitter will introduce the new timeline feature or not. And if yes, when will that happen and whether it will be optional.

What are your thoughts? Is algorithmic timeline a good or a bad idea? What if this feature is not “opt-in” and a forced one? Feel free to share your views in comments.

Related: How Facebook Is Using Surveys to Make Your News Feed More Relevant