Note: For Windows 10 Professional, Enterprise, and Education users who have chose to defer upgrades on initial Windows 10 release (build 240) today’s update will be listed as KB3135174 and will bring the build to 10240.16683.

As this update is aimed towards improving security, it is recommended to force an update and install it as early as possible.

The update is bigger than usual in size. The package size for x86 version is 270 MB and for x64 version the size is 489 MB. However this being a cumulative update, only the new fixes that are contained in this package will be downloaded and installed if you have installed previous updates. If you are installing a Windows 10 update package for the first time, the update needs to be downloaded at full size. 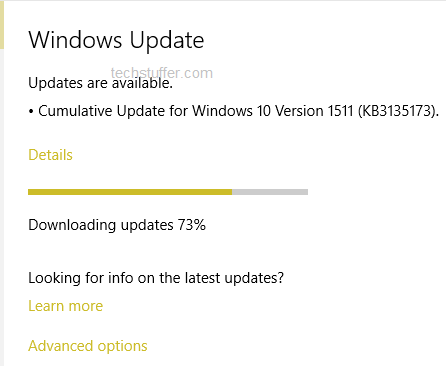 The following security vulnerabilities were patched in Windows 10 Cumulative Update 10586.104

Have you installed cumulative update KB3135173 (10586.104)? Are you experiencing any issues with the build? Share with us in comments.