How many of you reading this work in a non-IT department and hate your System Admin? You already hate your “IT Guy” for not listening to your complaints, telling you to restart your PC in middle of something to solve an issue 10 times a day, not picking up or returning your calls, not being able to understand your problems and what not?

Microsoft has taken a big step towards “recommending” Windows 10 to possibly everyone who’s not using it. Now even enterprise customers are not immune from Windows 10 adverts and it makes them feel like they’re missing so much in their life. 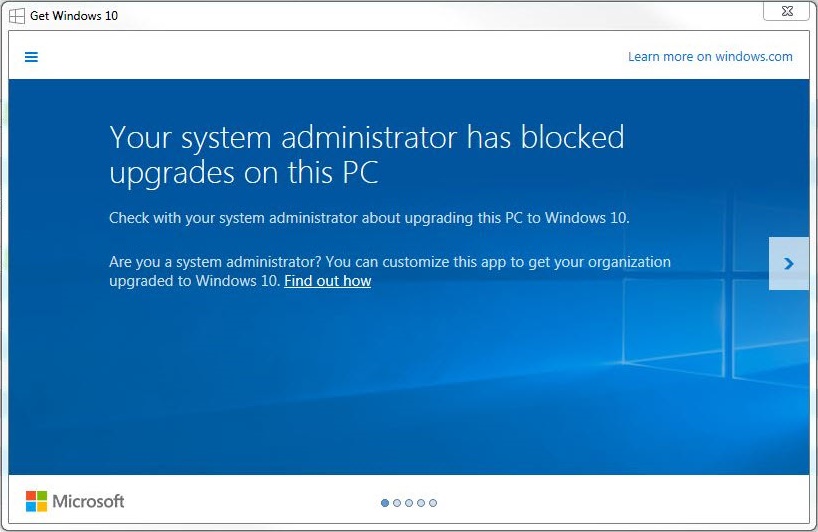 As a non-IT end-user’s perspective, this message reads like “Your system admin is a bad guy who’s blocking your way to shiney new Windows 10. You’re missing so much by not using Windows 10, you know? Just go ahead and nag your sys admin and tell him/her that they suck and ask why he/she is not allowing your PC to be upgraded, it’s free anyway.”

Upgrade to Windows 10 or We Will Nag You Hard

If I don’t sound professional, then what would you call Microsoft’s desperation to push Windows 10? Microsoft has been pushing Windows 10 so hard by any mean possible, that it is now being referred to as “Updategate”. From what I understand, you shouldn’t be associated with anything that has “gate” at its end, unless it’s Bill Gates. But Microsoft is very enthusiastic about Windows 10 and they just want everyone to have it, even if they don’t want it.

With the most recent advertisement of Windows 10 recommendations, Microsoft makes users feel bad and underrated because they’re not being allowed to use Windows 10 by their IT department. Neither an end-user or system admin would like to see such messages. It brings a whole new perceptive to “recommendations.”

This is not a polite way to recommend a product, even if it’s from Microsoft. Would you like a salesman coming over your house everyday to nag you about a product you don’t want? What if the salesman has decided not to stop until you buy that product?

Microsoft is just being that salesman.