Gabe Aul and team at Microsoft has dropped a new Windows 10 build for Insiders in Fast ring. Windows 10 preview build 14291 has been released for both PC and Mobile and brings a number of improvements.

Besides regular bug fixes and improvement, the latest Insider build of Windows 10 has improved Maps app and Alarms & Clock app. The most notable improvements though, are three new features introduced to Microsoft Edge browser.

Along with a new preview build for PCs and mobiles, Microsoft has finally made Windows 10 Mobile upgrade available to older devices. You can read more about Windows 10 mobile upgrade here.

One of the most widely requested features still missing from Microsoft Edge was extensions. With Windows 10 preview build 14291, Microsoft has added extensions to Edge. While only available to Insiders currently, Microsoft says that Edge extensions feature will roll-out to all users eventually.

The latest Windows 10 preview build will include three extensions to begin with. Microsoft Translator, which automatically translates pages in over 50 languages, a Mouse Gestures extension, and an early preview version of Reddit Enhancement Suite (RES). More extensions will soon be coming to Edge which includes popular extensions like AdBlock, Adblock Plus, Amazon, LastPass, Evernote among others.

Another new feature added to Microsoft Edge is the ability to ‘pin’ tabs. Pinning a tab makes it easy to keep your most-used sites and web apps always available in Edge. Pinned tabs appear at the start of the tab row, and shows the site’s favicon only. To prevent accidentally closing pinned tabs, the close button is not shown on them.

To ‘pin’ a tab, just right click on an open tab and click ‘Pin tab’. To unpin a tab, right-click on the pinned tab and choose ‘Unpin tab’. Pinned tab will come back when you you open Microsoft Edge the next time.

Paste and Go/Paste and Search

One of the handiest feature which is available in major browsers like Chrome and Firefox is Paste and Go. To go to a URL you just copied, you can right click on the address bar and click Paste and Go. Edge will directly open that URL without requiring you to press enter or clicking Go button.

The same feature can also be used to search the Web. You can right click and click Paste and Search to initiate a Web search. 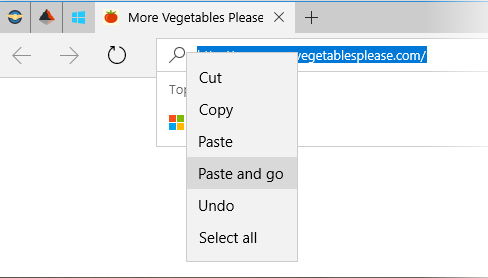 There were the three features introduced in Microsoft Edge with today’s Windows 10 Preview Build 14291. Are you an Insider? Do share your experiences with us.