Facebook recently made a decision to separate messenger functionality from its Facebook app and make it as a standalone app on mobile devices. After this change, users who are browsing through Facebook on their mobile device are not able to chat within the Facebook app. If a user wants to use chat function, he has to use Facebook Messenger app, which is available as a separate download. While this may not be a big problem for some, there are large number of people who are annoyed by this decision and still wants the traditional way of chatting on Facebook, right from the Facebook app.

The current version of Facebook Messenger app holds only 1 start in Apple’s App Store with many users mentioning it as a ridiculous decision to separate chat from Facebook app. Users are refusing to download a separate app that provides nothing but chat. A large number of users does not agree with Facebook which has literally forced users to download another app for having chat facility.

For all those who want to have chat functionality in Facebook app itself, there is a really simple way to do so on your jailbroken iOS device. You just need to download a tiny tweak that will allow you to chat within the official Facebook app. The tweak is called FBNoNeedMessenger and is available on Cydia for free.

Search for FBNoNeedMessenger tweak and install it. Respring your device and that’s all. Now open Facebook app and you can see the chat option just like before. 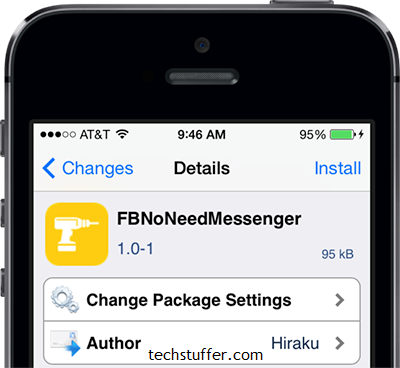 Related: Learn how to jailbreak your iPhone, iPod or iPad running on iOS 7.1.2