Please join us of an invitation-only event at Bill Graham Civic Auditorium in San Francisco on Wednesday, September 9, at 10:00 a.m.

Apple’s iPhone launch events are one of the most awaited events every year and this year’s event is no exception. Apple is expected to launch two variants of iPhone: iPhone 6s and iPhone 6s Plus. The next-generation iPhone is rumored to boast 12MP primary camera, 2 GB RAM, faster processor and force touch technology already used in Apple Watch.

After the update, you will see a new app for Apple event stream. Select this app and press the Play button to start watching the event.

To watch the event on your iOS device, all you need to do is to visit apple.com/live using Safari browser on your device running iOS 7.0 or later.

Android users can also watch live stream of Apple’s September 9 event on their device. Install VLC Player on your Android device and open it. Tap the Settings button on left and select Stream. Paste the following URL and your are ready to watch the live stream.

To stream the September 9 event live on your Windows 8.1 or lower PC, you will need a third-party app which allows you to play streaming media. VLC player is one of the best application for this purpose.

To watch event live using VLC Player, all you need to do is to open the live stream URL with VLC Player and it will stream live for you.

Copy and paste the following URL and click Play button. 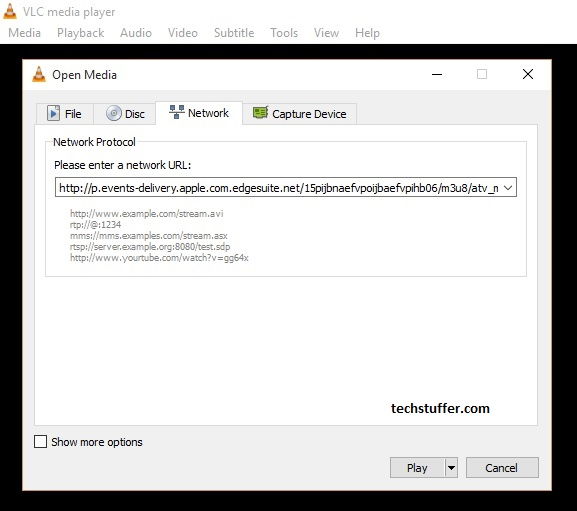 We are sure you do not wish to miss this event just like all other Apple iPhone fans. It will be interesting to see what Apple reveals out of their den this time and will it be a disappointment in terms of technical specifications or it will meet our expectations.

For now, this is it on Tech Stuffer. If you liked this article, then please share it with other.