iPhone 6c Rumors, Specs and Release Date: Everything We Know So Far

Parvez Shaikh
News
4 December 2015
[mks_dropcap style=”square” size=”52″ bg_color=”#ff3b3e” txt_color=”#ffffff”]I[/mks_dropcap]’m not sure why Apple decided to launch iPhone 5c, a colorful, ‘unapologetically plastic’ and cheaper variant of iPhone in 2013. But Apple seems to be planning to release another mid-range iPhone, possibly named iPhone 6c.

First of all, with launch of iPhone 5c, Apple broke an unsaid rule of ‘Apple doesn’t do cheap.’ iPhone 5c was a cheaper iPhone 5s with specifications of an iPhone 5, but with new clothes. Probably Apple strategically released iPhone 5c for those who were neither capable of buying a high-end, costlier iPhone 5s and iPhone 5 nor lower-end, out of date iPhone 4s, but who would rather settle down for cheaper, mid-range (and colorful) phone. This strategy somewhat worked for Apple but didn’t last long.

Now Apple is rumored to be ready for a new, cheaper variant of iPhone 6s which is expected to be released in early 2016, most probably before end of January. Speculations of Apple releasing a mid-range iPhone have been surfacing since iPhone 6s’ launch and now these speculations are at a stage to be believed as considerably true.

iPhone 5c was discontinued after the launch of most recent iPhone 6s and iPhone 5s became the cheap alternative to it. iPhone 5c has not seen a successor since its launch but if reports are to be believed, it soon will. Here are a few details about iPhone 6c we know so far.

iPhone 6c will reportedly carry iPhone 6’s hardware in smaller body. The 4-inch iPhone 6c will get Apple A8 chip and M8 motion coprocessor, with NFC and Apple Pay support. Some expects it to receive A9 chip but I firmly believe this has least possibility.

iPhone 6c will also get the TouchID fingerprint sensor. As far as the camera is concerned, it will not be boasting the 12MP camera introduced in iPhone 6s but instead it will get 8MP primary camera. It’s quite obvious that the capability to shoot live photos won’t be given to iPhone 6c. It can also be correctly guessed that Apple’s 3D Touch won’t me making it to iPhone 6c either.

I believe Apple won’t be making another plastic phone and iPhone 6c might get metal body. Plastic phones give a ‘cheap’ feel and metal-clad phone is a thing now a days any way. But if reports from Future Supplier is to be believed, Apple 6c will be getting same plastic body as iPhone 5c. See the photo below which is rumored to be leaked. 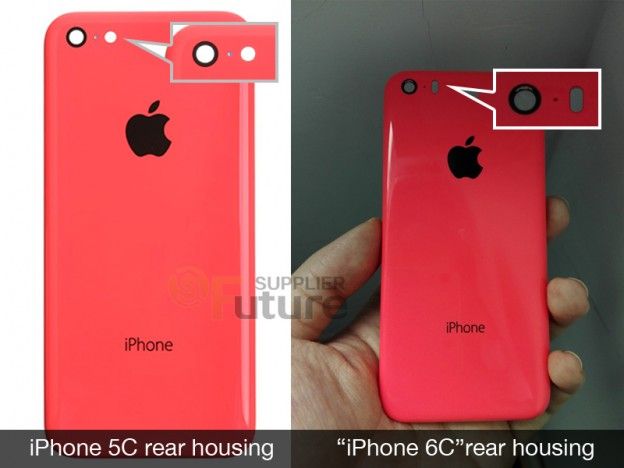 If Apple decides to release plastic body phone, then my bet on colors will be that Apple will be repeating the same colors with a little possibility of adding at least one new color. Black will be a good idea. If Apple goes with metal body, which seems more likely to me, Apple might provide at least two to three color options as iPhone 6.

It looks like Apple will no longer release an 8GB model and iPhone 6c will be carrying 16GB, 32GB and possibly 64GB models.

Apple will reportedly release iPhone 6c by end of January 2016. Apple may also drag the release until the end of first quarter. But I’m sure they will plan to get enough time to pay attention to the development, manufacturing and release of iPhone 7 which is expected to be released by September or October 2016.

While everything mentioned above remains just my personal guesses and speculations based on ‘leaks’ and ‘rumors’ spreading around, there’s a good chance that Apple will release a mid-range phone next year. It will be interesting to see whether these guesses and rumors turn out to be true or Apple surprises us like it did with iPhone 5c by bringing something unexpected.

You were reading iPhone 6C Rumors, Tech Specs and Release Date: Everything We Know So Far on techstuffer.com. If you found this article interesting, share it with others.

If you have a feedback or tip, feel free to contact me.