Activity trackers by Fitbit are no stranger anymore. Fitbit is making some of the finest activity trackers in market today but one thing is common among all Fitbit models. They aren’t pretty. But not anymore! Today at CES 2016, Fitbit announced Fitbit Blaze fitness watch which is Fitbit’s most stylish activity tracker so far.

Most activity trackers available today carry a standard and rather ugly rubber band. On the other hand, smart watches like Apple Watch, and Android wear has more of style quotient. Fitbit Blaze lies somewhere in middle. Blaze can be paired with fashionable bands of different colors and material. Blaze, also became the first Fitbit to have a color touchscreen display.

With Fitbit Blaze’s launch, Fitbit is trying to bridge gap between a fitness tracker and a smart watch. Design-wise, Blaze isn’t a breakthrough product, but Fitbit must be planning to get more stylish in future. 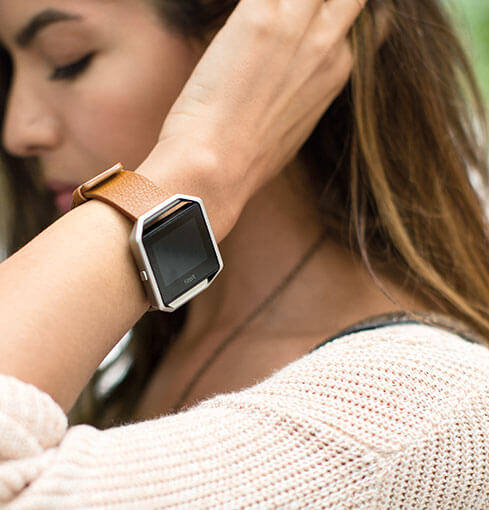 The most notable drawback with Blaze though, is that it lacks in-built GPS. Blaze will pull GPS data from a smartphone. Fitbit’s previous model Surge had native GPS function. If GPS is left aside, Blaze has strong functional capabilities.

Blaze can track daily steps, sleep, calories burned, and 15 different types of exercises. Thanks to the anonymous data shared by Fitbit users over the years, Fitbit Blaze is now using SmatTrack feature. With SmartTrack, Blaze is able to auto-track activities like running, walking, tennis, basketball, soccer, and machine workouts. Auto-track means users does not have to tell Blaze to “record” an activity and it can identify the activity by it self.

Blaze also offers guided workouts thanks to its native FitStar app which Fitbit acquired last year. In addition to track activities, Blaze can also show basic notifications like calls, messages, and calendar notifications. Users can also reject an incoming call and control music playing on a smartphone with Blaze.

According to Fitbit, Blaze’s battery will last for five days which is certainly not bad for a color display and a small device without in-build GPS.

Fitbit Blaze is available in three colors: Black, Blue and Plum at $199.95. You can pre-order Blaze right now and expect it to be shipped by March.