How to Semi-Restore iPhone Without Losing Jailbreak

Hey there! This is Parvez and today I wanted to share a quick-n-easy tutorial on how to semi-restore iPhone. If you’re facing issues with your jailbroken iPhone and wish to restore it without upgrading it to newer iOS version and losing jailbreak, Semi-Restore is what you should be looking for.

Performing a semi-restore of your iPhone will allow you to perform a complete restore -without upgrading the iOS version, letting you keep your jailbreak. To learn how to semi-restore iPhone without losing jailbreak, keep reading.

After releasing a new iOS version, Apple closes the signing window of previous version. You can’t restore to an iOS version after it’s no longer being signed by Apple.

For example, the current iOS version is iOS 9.3.2. If your device is on iOS 9.0.2 and you want to restore to the same version, you can’t; because it’s not being signed anymore. You must upgrade to iOS 9.3.2 -losing your jailbreak.

This is when the Semi-Restore utility by CoolStar comes at your rescue. By performing a semi-restore, you will be able to stay at your current iOS version even after restoring it.

How to Semi-Restore iPhone Without Losing Jailbreak

I will show you how to use Semi-Restore on a Windows PC. If you don’t have one, you can use use virtual machine on your Mac (or Linux). I have used a virtual Windows 7 machine on a Mac in this tutorial.

Warning: If anything goes wrong during semi-restore, you will have to restore to latest iOS version using iTunes -losing your jailbreak. I am not responsible if things don’t go as expected.

Install OpenSSH on your iPhone from Cydia (if not already installed). Reboot your device after installing OpenSSH.

Connect your iPhone to your PC (or virtual PC on a Mac). If you use virtual machine, make sure iPhone gets connected to it.

Run Semi-Restore and make sure it recognizes your iPhone and its iOS version.

If you have set passcode, Semi-Restore will ask you to enter it. Do so and click OK. 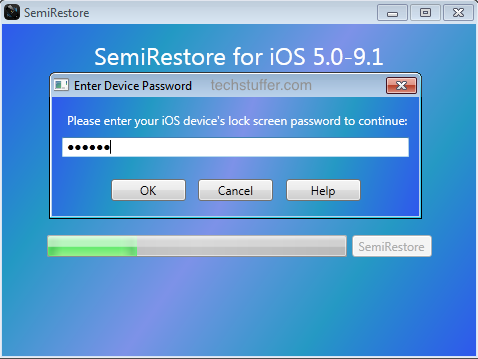 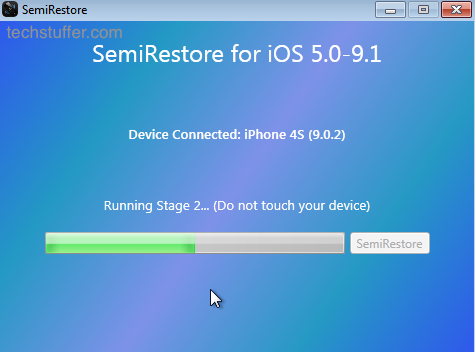 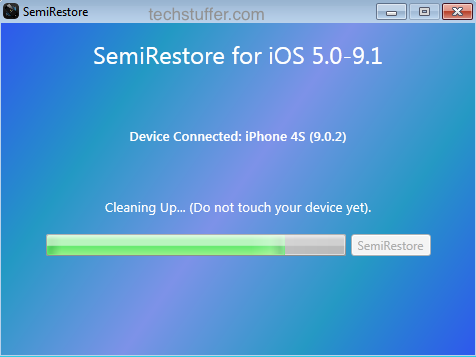 Once the semi-restore process is finished, you will see the welcome screen on iPhone. Perform the initial setup as usual to continue to Home screen.

You should see Cydia icon. Launch Cydia to make sure it works as expected.

That’s it. You have successfully semi-restored your iPhone to the same iOS version -keeping your jailbreak. You can now restore your backup.

If your iPhone keeps respringing/stuck at Apple logo, wait for 10 minutes before it gets back to normal. If it is stuck at the same stage for more than 10 minutes, perform a hard boot.

To hard boot your iPhone, press and hold both Power button and Home button together for 10 seconds. Release both when you see your iPhone display go black and Apple logo appears again.

After hard-booting, it may take more time than usual before your iPhone boots completely. If it takes more than 3-4 minutes, hard-boot it again.

iPhone Not Recognized by Semi-Resotre in Virtual PC

If you’re using a virtual Windows machine, make sure it gets connected to the virtual machine when you connect it.

Disconnect your iPhone and connect it back. You should see New Device Connected or similar message with an option to connect it to either the host or the guest (virtual) machine. Choose the guest machine and you should see it in Windows virtual PC.

That’s it folks. This was Parvez and you were reading How to Semi-Restore iPhone Without Losing Jailbreak at techstuffer.com. I hope you found this tutorial useful and I’d like to thank you for reading.

Feel free to ask for help in comments if you get stuck somewhere.