A recent court order asking Apple to assist in unlocking an iPhone belonging to San Bernardino shootings suspect has caused quite a stir. Through the court order, FBI has requested Apple to break into the iPhone by creating a backdoor in its iOS operating system. Apple CEO Tim Cook has opposed this order and wrote a public letter saying such demand from FBI could create a “dangerous precedent”.

Cook’s letter was followed by a list of frequently asked question through which Apple has clarified that they have done everything within their power and within the law to help in this case. Apple has stated that while they’re capable of creating a tool that FBI has asked for, they believe that the only way to guarantee that such a powerful tool doesn’t fall into the wrong hands is to never create it.

Now a new court filing has revealed that this is not the only case where Apple has been asked to break into its products. There are 12 other cases involving different models of iPhone and an iPad. All these requests were made in past few months only and Apple has either objected or challenged these requests to extract data from locked devices. 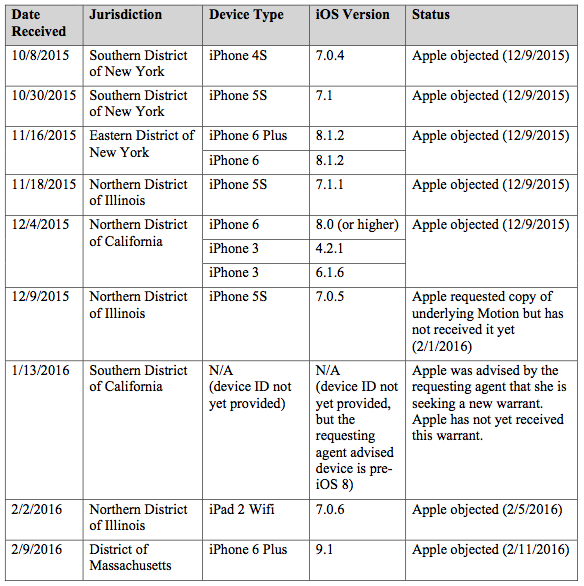 According to the court filing, these requests were filed in different jurisdictions. Device models involved in these cases are ranging from an iPhone 3 to an iPhone 6 Plus and an iPad 2, running on different iOS versions. There’s one device that remains unidentified at the moment.

Through the F.A.Q posted after Tim Cook’s letter, Apple states that if the FBI wins this case, law enforcement agents around the US have hundreds of other iPhones they want Apple to unlock.

What do you think about Apple – FBI encryption row? Should Apple create a tool that FBI is asking for? Will Apple’s refusal to create such tool put criminals on stronger side? Or is there any other way? Feel free to leave comments.