iPhone Users, Here is Your Chance to Get 30GB OneDrive Storage for Free

It has been two days since iOS 8 has been released by Apple. Most users like it, while others find iOS 8 slow, sluggish and buggy. Well, this post is not about praising or complaining about iOS 8. If I talk about the day of iOS 8 release, I was closely following Twitter hashtags “iOS 8”. And there has been plenty of users who were surprised to see that iOS 8 required around 5GB of free space in order to successfully install. Well, these users shouldn’t be surprised. Apple branded iOS 8 as “the biggest iOS release” already! After seeing huge space requirement to install iOS 8, most users made last minute efforts to make room by deleting photos, apps and other stuff.

Now it would have been nice if we knew Apple meant 5GB of free space when they called iOS 8 “the biggest”. But anyway. We should make sure this does not happen again. So what about solution? The solution is to use cloud. By using cloud storage, all your photos and documents remain on cloud and you don’t have to delete them in order to free up space. Cloud storage providers have a nice race going on. Google provides 15Gb of free space. Microsoft also offers 15GB free space on its cloud – OneDrive (formerly SkyDrive). Now Microsoft has played a big card. Microsoft has announced that OneDrive will offer huge space of 30GB for free. 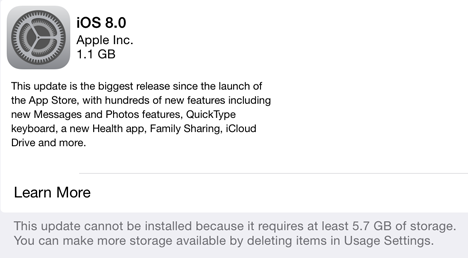 “We’ve been listening to the commentary about storage on the new iPhones released today and we wanted to get you more storage right away. We think you’ll appreciate having more free storage while setting up your iPhone 6 or upgrading to iOS 8.” explains Douglas Pearce, OneDrive program manager.

This limited time offer is ending on last day of September. Getting this huge storage on OneDrive is fairly simple. Enable auto upload for camera roll on OneDrive and you will receive 15GB of extra space on OneDrive, giving you total 30GB storage. Microsoft is offering the same treat to Android and Windows Phone users too. Android and Windows Phone users can also get 15GB of extra storage by enabling auto upload of camera roll.

Microsoft has chose the right time to woo users who are fed up of running out of storage on their devices. Especially in such situations when they want to upgrade to newer OS and they are unable to do so just because of not having enough space.

What do you think of cloud storage? Do you use cloud storage services? Would you recommend cloud storage to others? Have something to share about iOS 8 upgrade? Feel free to comment. We are listening.